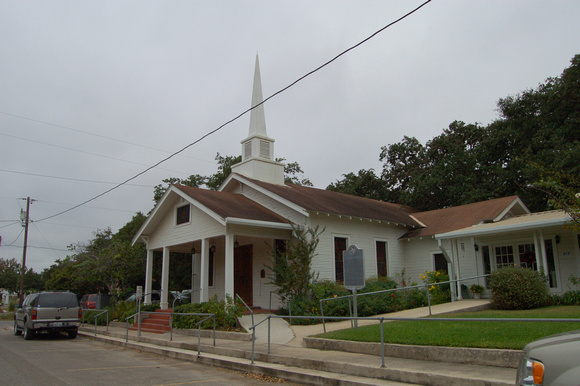 Text: By establishing a home and sawmill nearby in 1856 John and Nancy Leakey became the first to settle in the Frio River Canyon area. This congregation traces its origin to worship services held in the Leakey home by Methodist circuit riding Minister H. G. Horton. In 1883 the Methodist congregation began meeting in a schoolhouse built in the newly established town of Leakey. By 1885 the schoolhouse was also the site of a church school known as the Floral Sabbath Sunday School supervised by Dr. F. D. Johns. A town lot donated by J. B. and Fannie (Leakey) Johnson in 1890 was used by the Leakey Methodist Episcopal Church, South, to build its first sanctuary in 1890-91. The congregation met in the original sanctuary and later the county courthouse before building a new sanctuary at this site in 1922. The church became the Leakey Methodist Church in 1939. An education building was added in 1955 and a new parsonage in 1965. Annual Easter sunrise services and hosting community Thanksgiving services every three years are traditional activities of the congregation. Leakey Methodist has historically supported many youth and senior programs and missionary efforts. The congregation continues to provide religious guidance for the community.
Andrew Butler Photos
Powered by ZENFOLIO User Agreement
Cancel
Continue