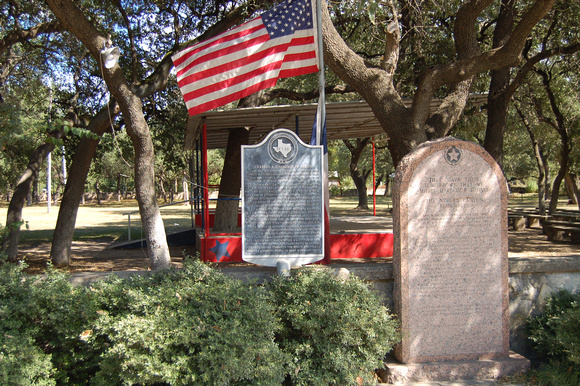 Charles A. Lindbergh in Texas

Text: Texas was important in the career of aviation hero Charles A. Lindbergh (1902-75). When he bought his first World War I surplus Jenny in Georgia, he flew it to Texarkana in 1923, so he could say he had flown in Texas -- the ambition of every barnstormer. With L. A. Klink in March 1924, he landed Klink's Canuck in Camp Wood while trying to fly to California. The next day in attempting a take-off, he accidentally crashed into Warren Puett's Store. No one was hurt, and his offer to pay for the damage was rejected. Then called "Slim," Lindbergh made many friends here. Two weeks after visiting Camp Wood, he became a U.S. Air Service cadet at Brooks Field, San Antonio. He completed advanced flight training at Kelly Field in 1925. On May 20-21, 1927, he made the first solo flight from New York to Paris, to world acclaim. Later in 1927, he returned to Texas, surveying the first commercial transcontinental air route through Amarillo; in 1929, he inaugurated U.S.-Mexico airmail in Brownsville. A great aviation pioneer, he drew up and proved many major World War II; collaborated in medical research; helped organize the Berlin airlift; and remained a hero to people of Camp Wood and Texas.
Andrew Butler Photos
Powered by ZENFOLIO User Agreement
Cancel
Continue