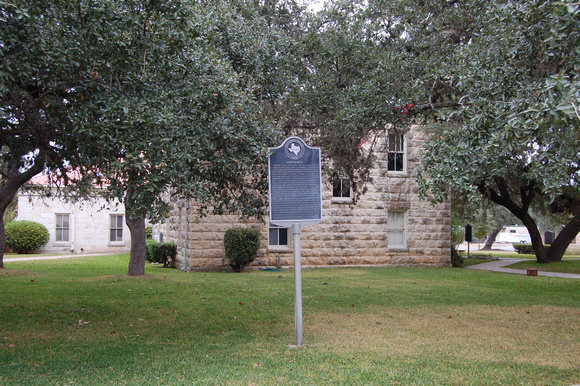 Text: Tennessee native John Leakey (1824-1900) came to Texas in 1847, settling for a time in Henderson County where he was a brickmason and rancher. He and his wife Nancy (Patterson) moved to Uvalde County in 1852 near present day Sabinal. A desire to pursue other endeavors took him to the Frio Canyon where there was an abundance of cypress timber. Despite constant threats of Indian attacks, Leakey settled his family and started a cypress shingle business. He served the Confederacy as a freighter during the Civil War, hauling provisions for the troops. Leakey returned to his home after the war to establish a steam sawmill and to attend to his ranching interests. He also began a school for the children of the community, and his home often served as a resting place of itinerant preachers. The town, situated on the Bandera-Edwards County line, was laid out in 1833 and named in honor of the resourceful pioneer who donated land for this plaza, a church, school, and cemetery. Leakey served as county seat of Edwards County until 1891, and became county seat of Real County when it was organized in 1913. A successful businessman, Indian fighter and pioneer, John Leakey's contributions and leadership were vital to the early growth of the area.
Andrew Butler Photos
Powered by ZENFOLIO User Agreement
Cancel
Continue