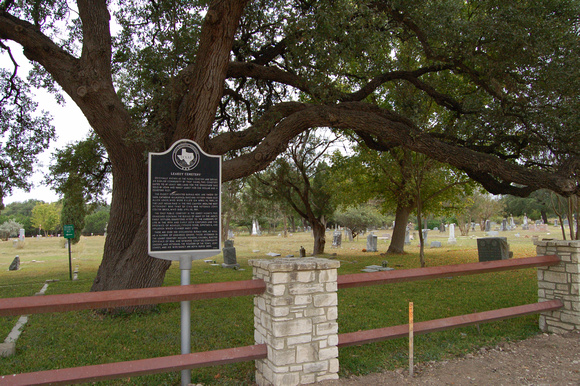 Text: Originally known as the Floral Cemetery and serving an earlier community by that name, this cemetery dates to at least 1881. Land for the graveyard was sold by John and Nancy Leakey for one dollar and a cemetery plot. The oldest documented burials here are those of Sara Catherine McLaurin (b. 1849) and fifteen-year-old Allen Lease, who were killed on April 19, 1881, in the last Indian raid in the Frio Canyon area. The next interment was that of Civil War Veteran John Colter Brice, who died April 30, 1881. The only public cemetery in the Leakey vicinity, this graveyard contains the burials of many of the area's early settlers. Gravestones attest to the hardships of life in the 19th and early 20th centuries and the epidemics of measles, typhoid fever, diphtheria, and influenza which claimed many lives. There are over 900 documented burials here, as well as a number of unmarked graves. Those interred in the Leakey Cemetery include pioneers, children, elected officials of Real and Edwards counties, community leaders and veterans. The founder of the town, John Leakey, and his wife Nancy are both buried here.
Andrew Butler Photos
Powered by ZENFOLIO User Agreement
Cancel
Continue