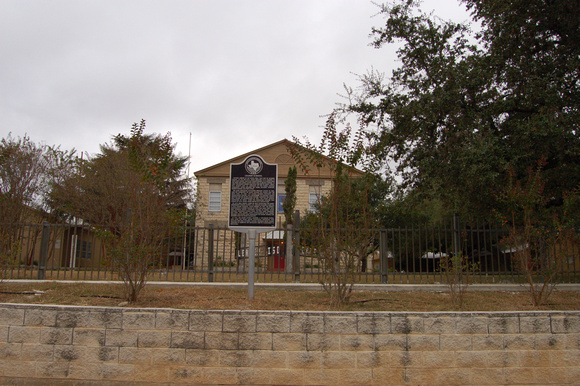 Text: Settlers arrived in the Leakey area, then part of Bandera County, in the mid-1850s. Many educated their children in their own homes, and early schoolhouses also existed near the John and Nancy Leakey home and at Brooks Springs. In 1883, the Leakeys deeded land near this site to John l. Avant, W.B. Burditt and J.B. Johnson of the Floral School Community, which included the Floral Academy, cemetery, Sunday school and post office. The State Legislature established Edwards County in 1883, and the Community of Leakey became the county seat the next year. In 1887, the Floral School property, on Schoolhouse Square, was transferred to Edwards County officials for use as the Leakey School. Although the county seat moved to Rocksprings in 1891, the Leakey School continued to grow. When the Legislature created Real County in 1913, Leakey again served as a county seat. In 1919, Real County Judge Ed Kelly established the Leakey Independent School District. A.G. Weston donated a site for a new school building, which opened in 1922. The district constructed a larger school in 1930. That same year, West Frio students began attending classes in Leakey. Other schools, including Cypress Creek, Rio Frio, Eexile, Stanford, Dry Frio, and Harper, later consolidated with Leakey schools. The district also maintained the Dietert School for children near the Divide Community. In 1941, the Leakey district adopted a 12th-grade system, and over the years added additional programs and facilities for area children. Annual reunions bring alumni together to celebrate the community and its commitment to education.
Andrew Butler Photos
Powered by ZENFOLIO User Agreement
Cancel
Continue