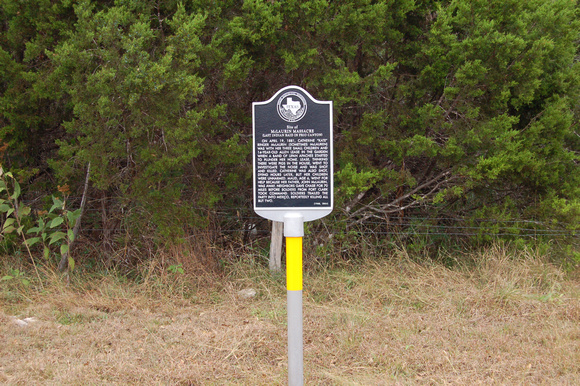 Text: Site Of McLaurin Massacre (Last Indian Raid in Frio Canyon) On April 19, 1881, Catherine "Kate" Ringer McLaurin (sometimes McLauren) was with her three small children and 14-year-old Allen Lease in the garden when a band of Lipan Apaches started to plunder her home. Lease, thinking there were pigs in the house, went to investigate the noise and was shot and killed. Catherine was also shot, dying hours later, but her children were unharmed. Maud, age 6, went for help because her father, John McLaurin, was away. Neighbors gave chase for 70 miles before soldiers from Fort Clark took command. Soldiers trailed the party into Mexico, reportedly killing all but two.
Andrew Butler Photos
Powered by ZENFOLIO User Agreement
Cancel
Continue