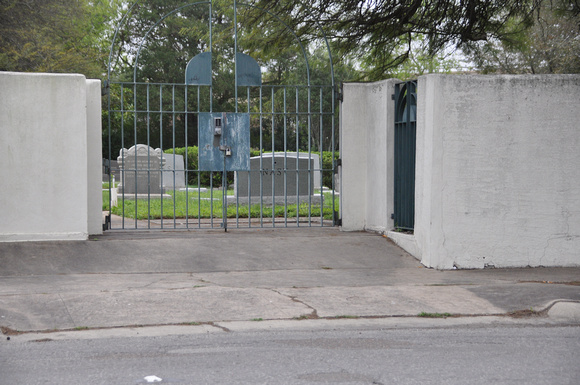 Corpus Christi
Nueces County, Texas
27 47.272' N 97 24.477' W
Directions: Start at the intersection of Brownlee Boulevard and Laredo Street. The cemetery is on the southwest corner of the intersection.

Historical Marker: This burial ground was established in 1875 to serve the pioneer Jewish settlers of Corpus Christi, 55 years before the formal organization of a Jewish congregation in the area. Earlier burials had been in the nearest Jewish cemetery, located at Gonzales (140 miles north). This land was deeded by Captain Richard King, founder of the noted King Ranch. David Hirsch and Emmanuel Morris, who acted as trustees for the Hebrew Benevolent Association, organized the cemetery. Both are buried here. The earliest marked grave is that of Helena Henry, who died in 1878, the infant daughter of Paul and Frederika Henry. Also buried at this site are all the members of the Richman Family, victims of a destructive 1919 hurricane. Prominent early residents of Corpus Christi interred here include grocer Julius Henry, who served as city alderman and postmaster; business and civic leaders Charles and Sarah H. Weil; civil war veteran and merchant M. Lichtenstein; and Simon Gugenheim, a successful area business and philanthropist. In 1961 Temple Beth El assumed control of the cemetery. Still in use, it reflects the proud heritage of the area's Jewish community.
Andrew Butler Photos
Powered by ZENFOLIO User Agreement
Cancel
Continue