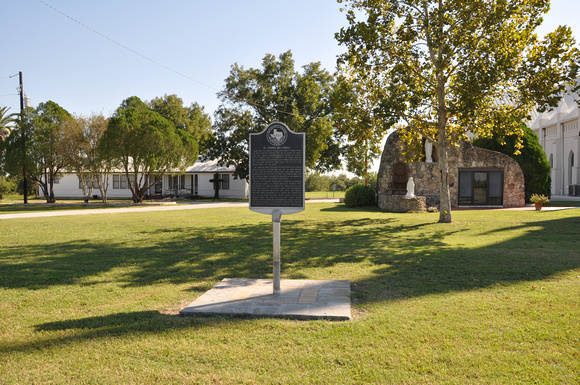 Text: Near this site (about 2.5 mi. N on Cibolo Creek) stood the 18th-century Spanish fort of El Fuerte de Santa Cruz del Cibolo, usually called El Fuerte del Cibolo or El Cibolo. Built to protect the many Spanish ranches between San Antonio and La Bahia (now Goliad), the fort was occupied first from 1734 to 1737, and again from 1771 to 1782. The land between the San Antonio River and Cibolo Creek, called "El Rincon", was part of an area deeded by the King of Spain to missions and many private individuals. The site of El Fuerte del Cibolo was part of a private ranch called El Rancho de San Bartolo which belonged to Andres Hernandez. In 1772 the Spanish government formally authorized the establishment of fifteen presidios (forts) from California to Texas. El Fuerte del Cibolo, which had been reactivated in 1771, came under that authorization and remained an active fort until 1782. Twenty soldiers were stationed at El Fuerte del Cibolo on July 4, 1776. Some of them helped move cattle and horses from this area to the Gulf Coast, where Spanish forces under Gen. Bernardo de Galvez defeated the British during the American Revolution, thereby contributing to the winning of American independence.
Andrew Butler Photos
Powered by ZENFOLIO User Agreement
Cancel
Continue