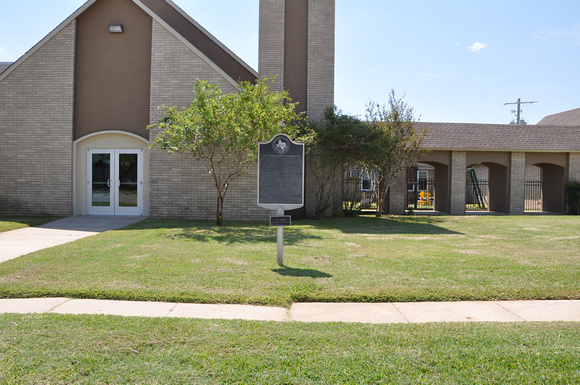 Text: This congregation was founded as a missionary church by The Rev. J. D. Walker in 1894, the same year the new town of Karnes City became the county seat of Karnes County. It is thought that early worship services were held in the school building. The first church building in Karnes City was the First Baptist Church erected in 1899. Other denominations shared the church building until they built their own church houses. Early baptismal services, held once or twice yearly, were administered in the San Antonio River or in a stock tank on a nearby ranch. As the membership grew, programs were added including a Womens' Missionary Society, youth group, Sunday School, and Sunbeam Band. The church helped to establish mission churches in the area. A local radio program also served the area for many years. Several property and facility additions and improvements were completed through the years to accommodate the needs of the congregation, including a parsonage, auditorium, fellowship hall, and education building. The First Baptist Church continues to provide support, education and spiritual guidance for the area as it has for over 100 years.
Andrew Butler Photos
Powered by ZENFOLIO User Agreement
Cancel
Continue