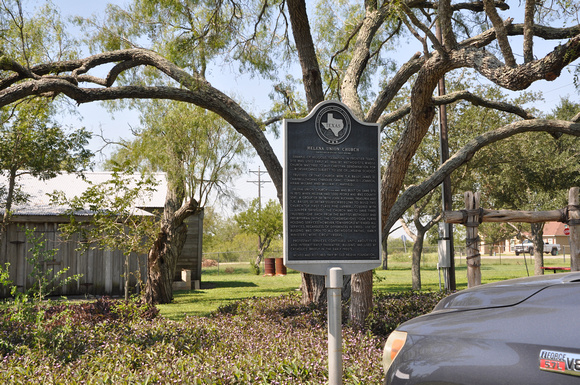 Text: Example of religious toleration in frontier Texas. Site was used early as 1866 by Methodists, whose church was "free to any Christian denomination for worship, (and) subject to use of Helena School". Trustees of that church were T. K. Bailey, James D. Campbell, Thomas Chandler, Isaac Conway, D. I. Johnson, Hiram McLand and William C. Mayfield. Helena Union Church (seen here) was built on same site in 1875 when Helena had 1,000 people and was county seat. A group of 58 (with John Ruckman, treasurer, and T. K. Bailey, secretary) subscribed $746 to build this church "of first class pine lumber covered with juniper shingles". The church was to have three trustees- one each from the Baptist, Methodist and Presbyterian faiths. The congregations took turns holding services; however, townspeople attended all services, regardless of differences in creed. Use of building was open to all Orthodox faiths. Early ministers were circuit-riders. Protestant services were continued until about 1925 and intermittently thereafter. Building was used by Catholics briefly in the early 1950s. Moved and restored 1969 by Old Helena Foundation.
Andrew Butler Photos
Powered by ZENFOLIO User Agreement
Cancel
Continue