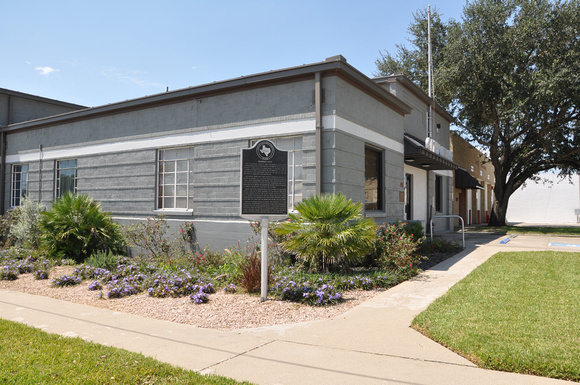 Karnes City
Karnes County, Texas
28 53.075' N 97 53.882' W
Directions: Start at the intersection of Calvert Avenue and Esplanade Street. The marker is on the southwest corner of the intersection.

Text: Seat of Karnes County; was founded in Christmas season, 1890, when a partnership headed by Otto Buchel bought 1,000 acres of land from J. L. Calvert for $5 an acre. The tract was near the geographic center of the county and adjoined the right-of-way of the San Antonio & Aransas Pass Railroad. The young town was first named Karnes in honor of Henry W. Karnes (1812-1840), Texas Ranger hero. Although a small, mild-mannered man, Karnes was conspicuous for his cool courage in battle. Red-headed, he was once beseiged by a group of Comanche women who attempted to wash the "berry juice" out of his hair. When the first Karnes post office was established April 1, 1891, "City" was added to the name. The new town grew so fast that within three years citizens petitioned for an election to remove the county seat from Helena to Karnes City. The voters favored Karnes City two-to-one and the move was made January, 1894. Having grown steadily since 1891, Karnes City has had seven newspapers, four banks, and many businesses. During the railroad boom, when a train was the most exciting way to travel, six passenger trains per day came through town. The economy of the area has been based on ranching, farming, uranium, oil, and gas.
Andrew Butler Photos
Powered by ZENFOLIO User Agreement
Cancel
Continue