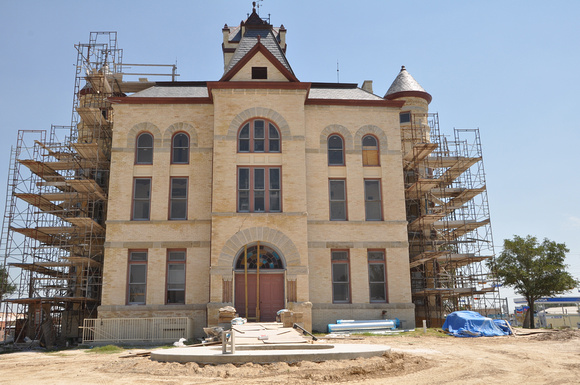 Karnes City
Karnes County, Texas
28 53.109' N 97 54.076' W
Directions: Start at the intersection of Calvert Avenue and Panna Maria Avenue. The courthouse is on the northwest corner of the intersection.

Text: In 1854 Karnes County erected its first courthouse in the county seat of Helena, an important stage stop between San Antonio and Goliad. The original courthouse was destroyed in a storm about 1865 and a new stone courthouse was built in Helena in 1873. In the mid-1880s the citizens of Helena refused to grant right-of-way and cash concessions sought by the San Antonio and Aransas Pass Railroad to route its proposed rail line through the town. As a result, the railroad bypassed Helena as it built a line through Karnes County in 1886-87. By 1893 the railroad town of Karnes City, established here in 1891, had surpassed Helena in population and political clout. Karnes City was chosen the new county seat on December 21, 1893. Karnes County officials let bids for a new courthouse and jail on January 4, 1894. They received bids from prominent Texas courthouse designers Alfred Giles and J. Riely Gordon, but awarded the contract to design and build a new county courthouse at this site to John Cormack. Cormack died before finishing the structure and his business associate J. A. Austin completed the job. The courthouse was dedicated on October 25, 1894, and completed on May 29, 1895. Its original turrets and clock tower were removed during 1920s remodeling.
Andrew Butler Photos
Powered by ZENFOLIO User Agreement
Cancel
Continue