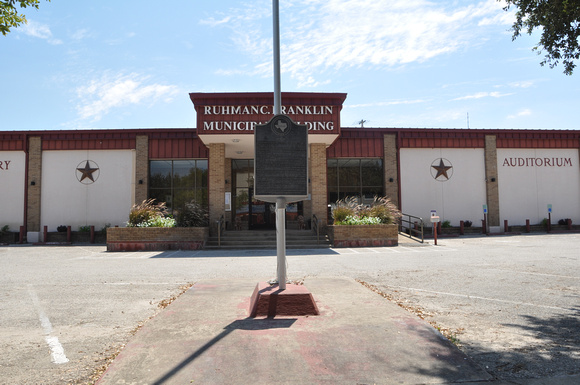 Text: The town of Kenedy occupies a site that once was part of a royal Spanish land grant to Don Carlos Martinez. American settlement in the area began after the Texas War for Independence (1836). Land for a townsite was purchased in 1886 by railroad promoter Mifflin Kenedy, for whom the community was named, and a post office was established the following year. Kenedy's early growth was attributed to its position as a major stop on the San Antonio and Aransas Pass Railroad. Early buildings in Kenedy included a church, store, and cotton gin. By 1906, businesses in the town included newspaper offices, a bank, livery and feed stables, and one of the largest cotton compresses in the state. Incorporated in 1910, Kenedy gained a reputation for gunfighting that earned it the name "Six Shooter Junction." In 1915, hot mineral water was discovered near the depot, and the Hot Wells Hotel and Bath House was a thriving business for nearly 25 years. An alien detention camp was located on the outskirts of town during World War II. Although passenger train service no longer runs through Kenedy, this historic town remains an economic center for the surrounding agricultural area.
Andrew Butler Photos
Powered by ZENFOLIO User Agreement
Cancel
Continue