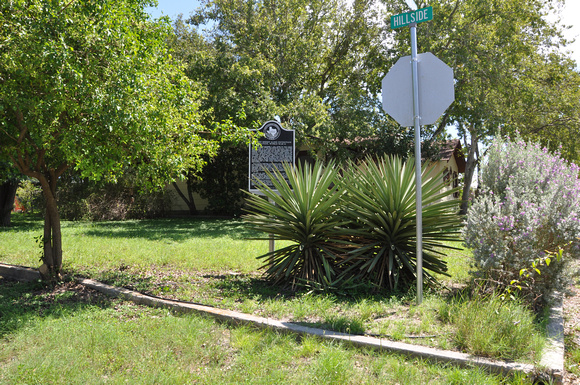 Kenedy
Karnes County, Texas
28 48.304' N 97 50.817' W
Directions: Start at the intersection of Clinton Place and Hillside Drive. The marker is on the southeast corner of the intersection.

Text: Shocked by the December 7, 1941, Empire of Japan attack on Pearl Harbor, Hawaii that propelled the U.S. into World War II, one U.S. Government response was the incarceration of more than 120,000 Issei (first generation, Japanese immigrants) and Nisei (second generation, U.S. citizens) in war relocation authority camps across the country. Through separate confinement programs, thousands of Japanese, German, and Italian citizens in the U.S. (and in many cases, their U.S. citizen relatives), classified as enemy aliens, were detained by the Department of Justice (DOJ) through its enemy alien control unit, and, in Latin America, by the Department of State's special war problems division. Enemy aliens were held until paroled or exchanged for U.S.. and allied citizens seized overseas by axis nations. Texas hosted three DOJ confinement sites, administered by the Immigration and Naturalization Service (INS) at Crystal City, Seagoville, and here, as well as two U.S. army temporary detention stations at Fort Sam Houston and Fort Bliss. Previously Camp Kenedy served as a World War I training camp and later as a Civilian Conservation Corps (CCC) camp In March 1942, the site transferred from the CCC to the INS. On April 21, 1942, the confinement site's first detainees arrived -- primarily adult males from Latin American republics. The site had accommodations for 1,200 internees and a staff of 84; however, the population averaged closer to 600 internees per month. Detainees had access to large athletic fields and a garden outside the fence. The INS ceased operation of the facility in September 1944 and the remaining internees were transferred to other camps, paroled, or repatriated. After the enemy alien detention station closed the site became a German, and later a Japanese enemy prisoner of war camp.
Andrew Butler Photos
Powered by ZENFOLIO User Agreement
Cancel
Continue