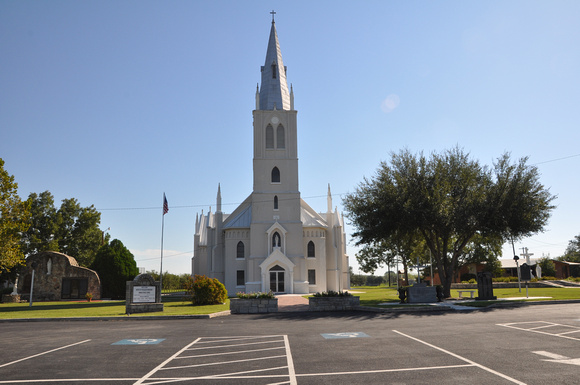 Text: The second Polish colony in Karnes County, the village in this area grew out of a small settlement known as St. Joe and was formally established in 1873. At times the priest at Panna Maria would conduct services at St. Joseph School in what would become Czestochowa. The "Mother Colony" church at Panna Maria was destroyed by lightning in 1877; Czestochowa settlers decided to build their own church. This was the subject of much controversy among the Polish pioneers of Karnes County. Anton Jarzombek (1836-1922) and Frank Mutz (1814-1891) each donated land for the church. Area residents contributed their labor to build the eighty-five by forty foot church with Gervase Gabrysch (1830-1904) as contractor. Bishop Anthony D. Pellicer blessed the church on February 10, 1878. Father W. Pelczar was assigned as the first pastor that September. As a sign of their reconciliation, the parishioners from the newly rebuilt Panna Maria church presented the new parish a large painting of the Virgin Mary of Czestochowa, the Patroness of Poland. The two congregations often shared leadership in the ensuing years. The Cestohowa church (adopting the Americanized spelling of the community) thrived into the 20th century. In the 1930s the church underwent intensive additions and remodeling. Though the original walls remained, the roof was completely removed and the ceiling raised. The north and south wings were added and the steeple was increased in height. In 1998, the church celebrated its 125th anniversary. At that time, the parish consisted of 380 members. The Nativity of the Blessed Virgin Mary Church continues in the traditions of its founders.
Andrew Butler Photos
Powered by ZENFOLIO User Agreement
Cancel
Continue