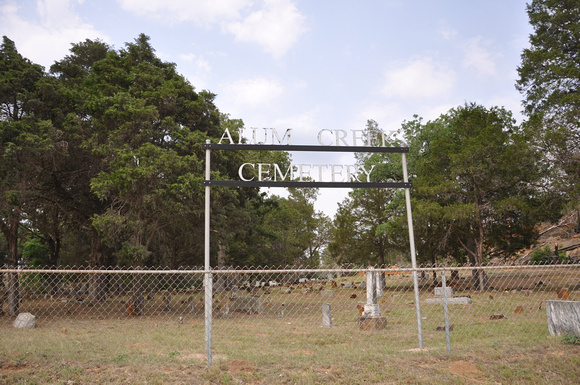 Text: In the 1820s, several families answered Stephen F. Austin's call to settle this part of Texas, then a part of Mexico. The Cottle, Highsmith, Grimes, Craft, Ridgeway, White and Parks families were among those who arrived in this area from Missouri in 1828. Three years later, Sarah (Turner) Cottle, whose husband had died during the journey to Texas, received title to her land, situated along Alum Creek. After her death in 1843, the property was divided among her heirs. In 1857, Newton and Mary (Cottle) Alsup deeded land to the Alum Creek community for a cemetery and a Methodist Episcopal Church, South. Other denominations held services in the building, which was also used for a community school. The first marked graves in the cemetery date to 1875, and a number of burials are marked by fieldstones. In 1950, community members formed an association. It continues to maintain the cemetery, which remains a link to the settlers who arrived in the years before Texas independence and to the generations that have since been a part of the Alum Creek community.
Andrew Butler Photos
Powered by ZENFOLIO User Agreement
Cancel
Continue