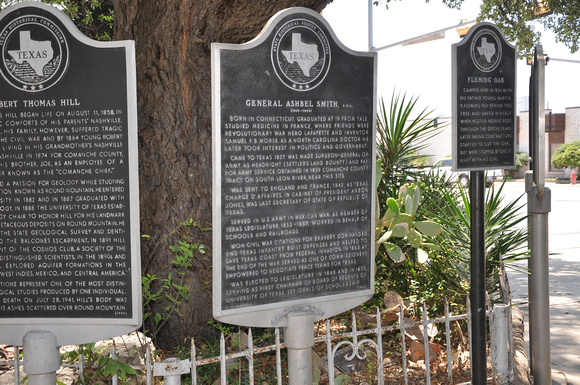 Text: (1805-1886) Born in Connecticut. Graduated at 19 from Yale. Studied medicine in France, where friends were Revolutionary War hero Lafayette and inventor Samuel F. B. Morse. As a North Carolina doctor he later took interest in politics and government. Came to Texas 1837. Was made Surgeon-General of Army. As headright (settler's land bounty) and pay for Army service, obtained in 1839 Comanche County tract on South Leon River, near this site. Was sent to England and France, 1842, as Texas Charge D'Affaires. In Cabinet of President Anson Jones, was last Secretary of State of Republic of Texas. Served in U.S. Army in Mexican War. As member of Texas Legislature, 1855-1857, worked in behalf of schools and railroads. Won Civil War citations for bravery. Commanded 2nd Texas Infantry. Built defenses and helped to save Texas Coast from Federal invasion. In 1865, at the end of the war, served as one of Commissioners empowered to negotiate peace terms for Texas. Was elected to Legislature in 1865 and in 1877. Serving as first Chairman of Board of Regents of University of Texas, set ideals of scholarship.
Andrew Butler Photos
Powered by ZENFOLIO User Agreement
Cancel
Continue