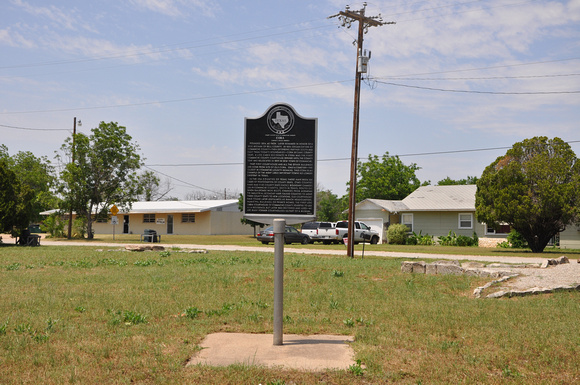 Text: Founded 1854, as Troy. Later renamed in honor of a Miss Beeman of Bell County. In 1856 organization of Comanche County--then extending farther south and east than today's boundaries--Cora became county seat. A log cabin residence in Cora was the first Comanche County courthouse, serving until the county seat was relocated in 1859 in new town of Comanche. That first courthouse and all the other buildings are gone from site of Old Cora. Only a cemetery--the oldest in Comanche County--remains. Thus Cora is an example of the many early, important towns no longer existent in Texas. In the 254 counties of Texas, there have been 126 cases of redesignation of county seats. (Two counties have had five county seats each.) Boundary changes (as in Comanche County), shifts in travel routes (as when railroads were built), changes from agrarian to industrial economy have caused counties to move their county seats to new locations. Old courthouses have found later usefulness as ranch headquarters, municipal buildings, or private homes. The first log cabin courthouse of Comanche County reverted to use as a residence, but later was restored and used--as are many former courthouses--as part of a museum.
Andrew Butler Photos
Powered by ZENFOLIO User Agreement
Cancel
Continue