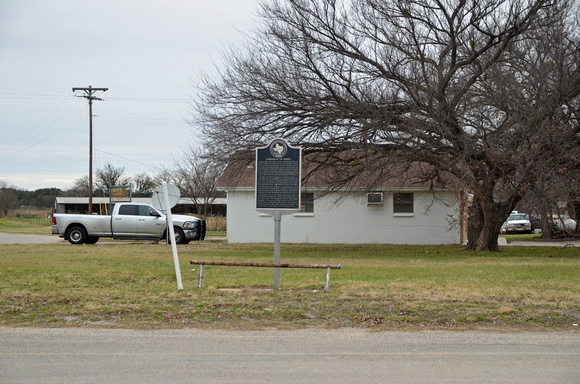 Text: Began about 1870 when William Yarborough and J. A. Wright, early settlers, located on Jimmie's Creek. As a community developed, the settlers built a log schoolhouse near a spring, in 1877. W. D. Cox was the first teacher. The Methodist church was also founded in 1877 and a few years later the Baptist church and Church of Christ were started. All denominations took turns using the log schoolhouse for worship. In 1883 Tom Davis opened a store and soon J. C. Stapp bought an interest in it. In 1886 Stapp became the first Postmaster, naming the post office after his young son Sidney. Holstein dairy cattle, basis of a major industry, were brought here in the 1880s. Between 1890 and 1910 Sidney had several doctors' offices, drug stores, gins, a general store, barber shop, lodge hall, and telephone exchange. Reorganized in 1902, the school became an accredited high school. Around the turn of the century, the town shared in the national attention focused on nearby Round Mountain--first field laboratory of the remarkable Dr. Robert T. Hill (1858-1941), world-famous geologist. His studies vastly increased knowledge of the geology of North America and Texas, and after his death, he had his ashes scattered atop the mountain.
Andrew Butler Photos
Powered by ZENFOLIO User Agreement
Cancel
Continue