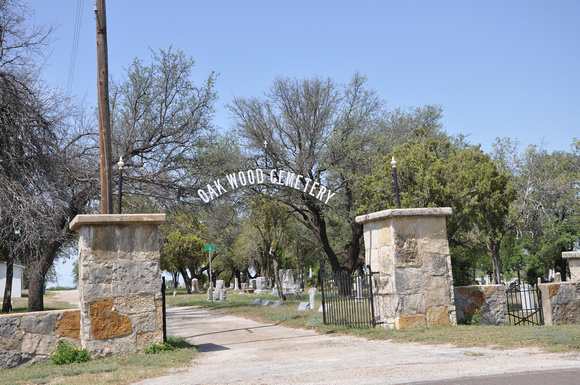 Historical Marker: Reconfiguration of Comanche County by the state in 1858 led to a relocation of its county seat. In 1859 local land developer Captain John Duncan donated 200 acres here for a townsite to served as Comanche County seat. Duncan's deed specified that sufficient portions of the donated acreage be set aside for a graveyard, churches, and schools. A cemetery consisting of about 5.5 acres was established and named Oakwood for the impressive oak trees which graced the site. The earliest marked grave is that of one-year-old John Neely, who died in January 1861. Since its establishment the cemetery has been the property of the City of Comanche and has served as a community graveyard. Parcels of land originally owned by John Duncan and conveyed to William and Sue (Shortridge) Martin in 1895 were added to the interments of numerous veterans of conflicts ranging from the Republic of Texas era to the present, including both Union and Confederate soldiers from the Civil War. Also buried here are pioneers of this area and their descendants, state and national politicians, local civic leaders, and members of various fraternal organizations.
Andrew Butler Photos
Powered by ZENFOLIO User Agreement
Cancel
Continue