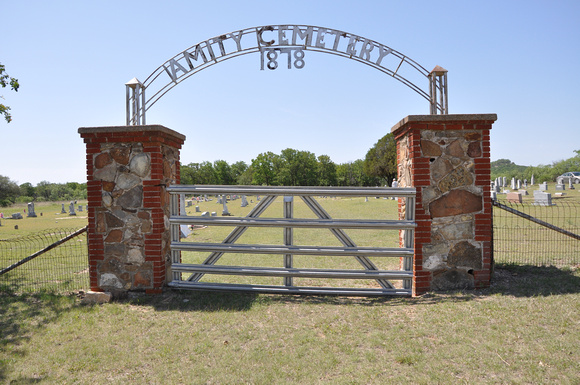 Historical Marker: When 14-year-old Charles Farley died in Feb. 1878, his parents buried him near their farmhouse, as this frontier locality had no cemetery at the time. Three months later Fannie Nichols (1875-78) died and was buried nearby. The Farleys then donated an acre of land as a community graveyard. The neighbors built an adjacent brush arbor for funerals and general gatherings. In the summer of 1878, Baptists organized a church, naming it Amity (friendship). Before erecting their own buildings, Baptists and Methodists held services in the brush arbor or at Amity School (1 mi. NW). William H. Lindley (1840-1913) bought land south of the Farley Farm in 1885. When new surveys placed the cemetery on his land, Lindley deeded the burial ground to the public. Later his son-in-law, George Brown, gave an additional acre to be used if needed. A large tabernacle with permanent fixtures replaced the brush arbor and was used for funerals until 1938 or 1939, when it was severely damaged by a storm. Free-will donations have maintained the cemetery since 1951. A "First Sunday in June Singing" which Amity Baptist Church originated in 1897 now serves as an annual memorial day and homecoming. By 1978 Amity Cemetery has nearly 400 graves.
Andrew Butler Photos
Powered by ZENFOLIO User Agreement
Cancel
Continue