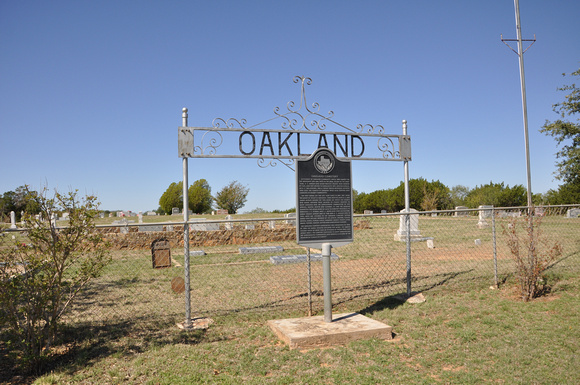 Historical Marker: Settlement of Oakland community, which was named for the abundant live oak trees in the area, began in the early 1860s. H. S. Anglin and Sarah Frances Weaver were married in 1872, and they moved to Oakland in 1875. Brother Anglin, as H. S. was known, was a circuit riding Methodist minister who built the church in Oakland while also serving nine churches in nearby communitites. The first burial on this site took place in May 1891 upon the death of Willey N. Burleson. Three months later H. S. and Sarah Anglin deeded the two acres on which the church and burial gound were located to church trustees to serve Oakland and the surrounding communities of Sipe Springs, Duster, Beattie and Gorman. In 1907 the Anglins conveyed two more acres of land to cemetery trustees D. N. Burleson, L. C. Echols and T. J. Munn and their successors. Sarah Weaver Anglin died in 1928 and H. S. Anglin died in 1931; both are interred in the Oakland Cemetery. Others buried here incude members of the Anglin, Brooks, Couch, Dennis, Dukes, Echols, Foote, Hadaway, Hamlin, Hasley, Little, Munn, Poyner, Sexton, Sutton and Underwood families. The Oakland Cemetery Association was organized in 1976. By 1998 the burial ground occupied five acres. The graves include those of more than 40 veterans of World War I and World War II. The cemetery continues to serve Oakland and the surrounding communities and remains a record of the pioneers of Comanche County.
Andrew Butler Photos
Powered by ZENFOLIO User Agreement
Cancel
Continue