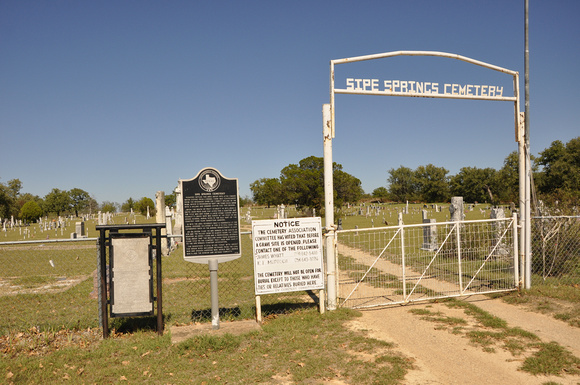 Historical Marker: Pioneers settled this area about 1870, after finding water seeping from a spring. There was controversy from the beginning over the correct spelling of the name, which is pronounced "seep." The town soon grew into a milling and ginning center for this region. Upon the death of Pratt Scarlett in 1873, John C. Smith (1828-1907) gave five acres for a cemetery, but the title was not clear. A large stone carved with Scarlett's death date was buried at the foot of his grave. Several burial sites in the old part of the cemetery have plain sandstone markers. In 1890 the area residents built a tabernacle at the burial ground. Enlarged in 1951, it is still used for gatherings such as the annual homecoming in July. An oil boom came to Sipe Springs in the winter of 1918 and the village grew to almost 10,000. The town boasted an opera house and a professional baseball team. About that time Nels and Sarah Crain acquired a clear title to the cemetery tract. Their heirs gave it to the Sipe Springs Cemetery Association. The graveyard is still in use today with about 1150 grave sites including veterans from the Civil War and Spanish-American War; World War I, World War II; and the Korean and Vietnam conflicts.
Andrew Butler Photos
Powered by ZENFOLIO User Agreement
Cancel
Continue