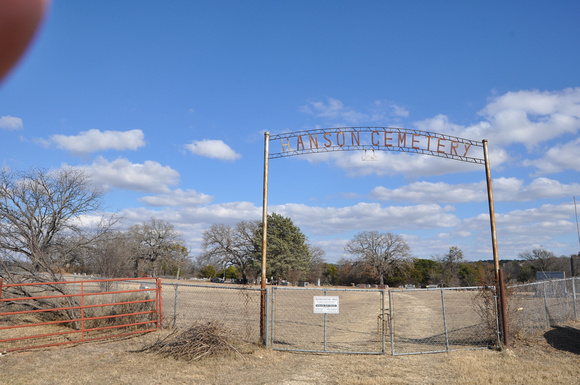 Historical Marker: When brothers J. H. and J. G. Walton and J. H.'s wife Annie Warsham Walton formally granted approximately one acre of land for a community burial ground in 1925, Hanson Cemetery was already well established. The scattered settlers of the community of Roch had already buried over fifty loved ones at the site. The community of Roch was named after Captain John Bernard Roch, who had one of the earliest homesteads in the area. The Roch community consisted of homesteads scattered along either side of what became the Comyn Highway (FM 1496) and county roads 434 and 438. The earliest burial at the cemetery is that of William Hanson, whose worn grave marker indicates that he died in either 1870 or 1871. Tradition states that William Hanson and M. Walton were neighbors who enjoyed hunting along Sowell Creek. The two men agreed that the man who was the first to die would be buried under oak trees along the creek, and the resulting cemetery would bear his name. The later burial of Hanson's wife, Martha Dunn Hanson, began the Hanson Cemetery. The Dunn family and the Walton family also had significant burial plots in the old section of Hanson Cemetery. The cemetery grounds and grave sites were taken care of for many years by the Hanson Cemetery Committee under the chairmanship of J. P. Thompson. After Thompson's death in 1941, it was necessary to form a Hanson Cemetery Association to continue with the cemetery's upkeep. The association incorporated in 1985. A veterans memorial was erected in 1998 to honor those veterans interred in the cemetery.
Andrew Butler Photos
Powered by ZENFOLIO User Agreement
Cancel
Continue