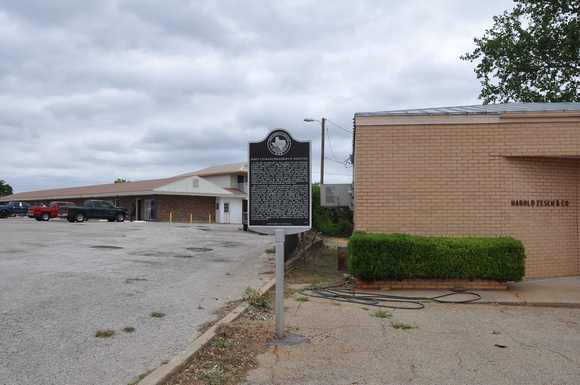 Text: At this site on February 5, 1847, seven or eight Penateka Comanches headed by chief Ketumusua (also Ketumsee, Katemcy, Katemoczy) had their first encounter with an expedition of German immigrants led by John O. Meusebach. The group of about forty settlers left Fredericksburg on January 22 to explore the area between the Llano and Colorado Rivers included in the Fisher-Miller land grant. The society for the protection of German immigrants (Adelsverein) had acquired colonization rights to the tract, and Meusebach, the society's general agent, chose a diplomatic approach to interacting with the people already living here. The Comanches, carrying a white flag, approached the Germans' camp and asked whether they intended to wage war. Meusebach replied that they had come in peace and presented gifts. After they held a consultation through an interpreter, Ketumusua invited the Germans to visit his village on the San Saba River. The parties had a meal together, and the Comanches escorted the Germans to their camp. This first meeting laid the groundwork for a successful peace council on March 1-2, 1847, a rare instance in American history when native people and immigrant settlers negotiated a voluntary agreement for sharing territory. The Comanches honored their treaty with the Germans even as they continued to be in conflict with other settlers. Ketumusua later became the Principal Chief of the Southern Comanches, and Meusebach was elected to the Texas State Senate. Their first meeting is remembered as a significant exchange between two cultures who added to the intertwined history of the Texas hill country.
Andrew Butler Photos
Powered by ZENFOLIO User Agreement
Cancel
Continue