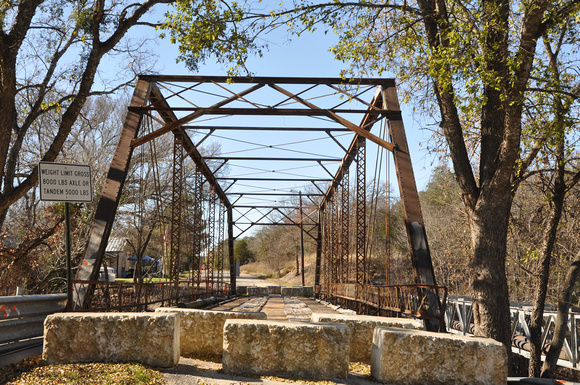 Historical Marker: The route once known as the Old Georgetown Road was in existence by 1854 and crossed the Leon River here. A ferry operated at this crossing as early as 1854 and was owned by R. G. Grant, a local entrepreneur and land developer. The Bowstring Truss Bridge erected near here in 1882 was the first metal truss bridge in Coryell County. It was damaged by two major floods in 1899 and 1900, and the County Commissioners Court authorized the building of another bridge. The George E. King Bridge Company of Des Moines, Iowa built this structure in 1904. Features include steel construction, wood decking, original lattice railings, pin-connected members, and elaborate stone abutments. The overall length of 141 feet from end to end allows for the 4-foot depth of masonry piers supporting the bridge. It is a 137-foot Pratt through truss span with a 5-foot timber approach span, and is one of few such bridges surviving in Texas. The 1904 bridge served as a major east-west artery for Central Texas. The road became part of State Highway 7 in 1917, and was renamed U.S. Highway 84 in the 1930s. The historic bridge was restored and rededicated in 1994.
Andrew Butler Photos
Powered by ZENFOLIO User Agreement
Cancel
Continue