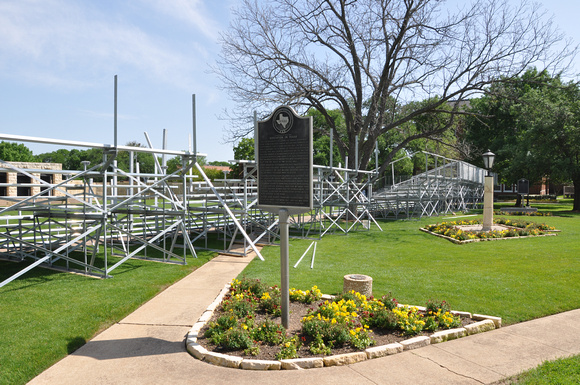 A Memorial to Civil War Education in Texas

Historical Marker: Baylor University (including the "Female Department" later to become Mary Hardin-Baylor) had operated at Independence for 15 years before 1861. In the Civil War it suffered the setbacks of Texas education in general. This was despite leadership of its 1861-63 president George W. Baines (ancestor of U.S. President Lyndon B. Johnson) and loyalty of such patrons as Mrs. Sam Houston and her mother, who donated dried fruit for the tables in the dining hall. State bounties for education that previously had aided Texas colleges stopped in 1861. Many of the 2,416 students of 1860 became soldiers; many of the 25 Texas colleges had to close. Schools for younger children also suffered. The 1861 legislature passed free school laws, but could give no funds to schools. Children who waved from classroom doors to marching soldiers were going to subscription schools, paid for by their own parents. Old men, women and the disabled were the teachers. A mother or older sister often would "hear lessons" in the home. Books were scarce. Paper was unobtainable for replacing those that wore out. Writing was done on slates or in sand spread smooth on a table.
Andrew Butler Photos
Powered by ZENFOLIO User Agreement
Cancel
Continue