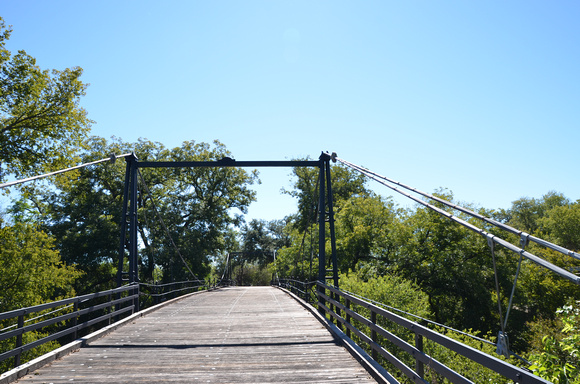 Text: In the late 19th Century, San Saba lacked direct access to developing railroad lines needed to reach expanding markets. The Beveridge Bridge, a single-land suspension bridge, was constructed in 1896 to fill this need. The bridge was named for Irish immigrant John H. Beveridge, a former British merchant captain who settled in San Saba in 1849. He originally spanned the river with a dam known as the “Beveridge Crossing”. By the 1890’s locals petitioned county commissioners for a more reliable crossing. The Flinn-Moyer Company of Weatherford, Texas, built the Beveridge Bridge at a cost of $2275. County Commissioners appointed John H. Beveridge to personally oversee the construction of the bridge that would replace his dam. Completed on June 24, 1896, the bridge was 190 feet long with a 140 foot suspended span. It extends approximately 300 feet between anchorages. The Beveridge Bridge withstood floods in 1899, 1922, and 1938. After the 1938 flood, county commissioners requested bids for its reconstruction. The Austin Bridge Company of Dallas was hired to carry out the work. In 1938, the bridge was reconstructed as an unstiffened suspension bridge with new parallel wire main cables spun in-situ on the original 1896 pipe truss towers using no. 9 galvanized steel wire. In 2004, the bridge was closed for vehicular traffic due to deterioration of the main cable underground. The Texas Department of Transportation used Federal Highway Transportation Enhancement Funds to replace the main cables and restore the bridge for pedestrian use. The bridge continues it transporation legacy as pedestrian bridge and remains a county-owned landmark.
Andrew Butler Photos
Powered by ZENFOLIO User Agreement
Cancel
Continue