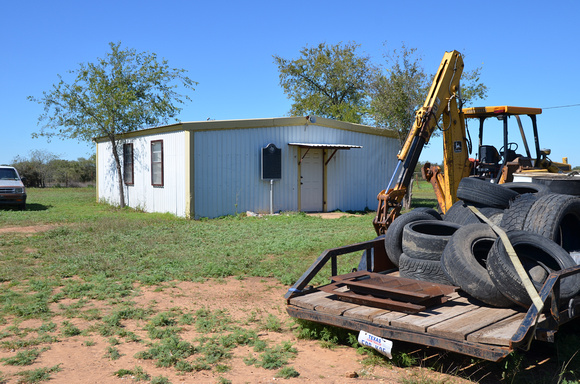 Text: A site once famous for its horses and racetrack. Riley Harkey (1832-1920) and Israel Harkey (1835-1914) were Indian scouts in Texas in 1850-53. In 1855 they led their parents, Mathias and Catherine Harkey, to move here from Arkansas with other adult sons, daughters, in-laws and grandchildren. The families ranched, and Mathias Harkey ran a country store for many years. Riley Harkey brought to Texas a fine, fleet footed mare, who with her racing progeny drew crowds of enthusiasts to this site for half a century. Other sons and grandsons of Mathias Harkey also joined in the breeding, training, and racing of horses. Stores, blacksmith shop, and other businesses all faced east on a single street overlooking the flat with its racetrack and baseball diamond. There was no post office, but the village was so well known that mail addressed to Harkeyville promptly arrived here. On Nov. 26, 1873, George W. Barnett (1823-1885) gave land for the first school; the schoolhouse was used also for church services and public meetings. The racetrack closed in 1907; the cotton gin burned in 1920, and was not rebuilt; school consolidated in 1929 with San Saba. The last store closed in 1954. A community hall, built 1973, marks site of the town.
Andrew Butler Photos
Powered by ZENFOLIO User Agreement
Cancel
Continue