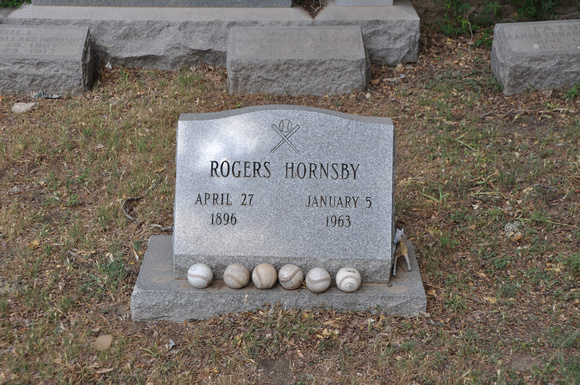 
Text: Rogers Hornsby, Sr. nicknamed "The Rajah", was an American baseball infielder, manager, and coach who played 23 seasons in Major League Baseball (MLB). He played for the St. Louis Cardinals (1915–1926, 1933), New York Giants (1927), Boston Braves (1928), Chicago Cubs (1929–1932), and St. Louis Browns (1933–1937). Hornsby had 2,930 hits, 301 home runs, and a .358 batting average during his career; he was named the National League (NL)'s Most Valuable Player (MVP) twice, and was a member of one World Series championship team. Born and raised in Texas, Hornsby played for several semi-professional and minor league teams. In 1915, he began his major league career with the St. Louis Cardinals and remained with the team for 12 seasons; in this time, Hornsby won his first MVP Award and the Cardinals won the 1926 World Series. After that season, he spent one season at the New York Giants and another with the Boston Braves before being traded to the Chicago Cubs. He played with the Cubs for four years and won his second MVP Award before the team released him in 1932. Hornsby re-signed with the Cardinals in 1933, but was released partway through the season and was picked up by the St. Louis Browns. He remained there until his final season in 1937. From 1925 to 1937, Hornsby intermittently managed the teams for which he played. After retiring as a player, he managed the Browns in 1952 and the Cincinnati Reds from 1952 to 1953. Sportswriters consider Hornsby to be one of the best hitters of all time. His career batting average of .358 is second only to Ty Cobb in MLB history. He also won two Triple Crowns and batted .400 or more three times during his career. He is the only player to hit 40 home runs and bat .400 in the same year (1922). His batting average for the 1924 season was .424, a mark that no player has matched since. He was elected into the National Baseball Hall of Fame in 1942. Hornsby married three times during his life, in 1918, 1924, and 1957, and had two children, one from each of his first two marriages. Known as someone difficult to get along with, he was not well-liked by fellow players. He never smoked, drank, or went to the movies, but frequently gambled on horse races during his career. Source Wikipedia
Andrew Butler Photos
Powered by ZENFOLIO User Agreement
Cancel
Continue