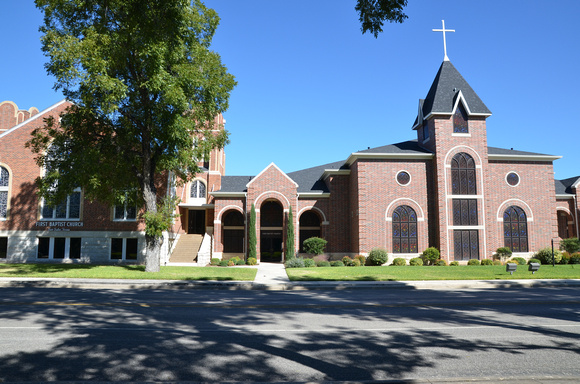 Text: Prior to the establishment of the town of San Saba, a group of citizens formed a Baptist congregation which met in homes three miles east on Simpson Creek. Formed in 1856, the congregation was served by missionary preacher T. Howard (1817-1882). The members agreed to move their church to town as soon as the site was determined. When the first San Saba Courthouse was completed in 1857, the Baptist congregation began meeting there, continuing until 1878, when they met in a small schoolhouse. In 1883, under the guidance of The Rev. McHenry Seal (1877-1957), a church building was erected at 307 E. Storey Street. A parsonage was added in 1899. Both structures were destroyed by fire in 1923. A building fund was started, and in 1924 the present site was acquired and a new church was begun. The basement construction was of marble donated by a local quarry, which closed due to financial troubles. The building was completed using red brick. A native stone parsonage was built in 1932. In 1947, an educational facility was added, using converted barracks purchased from Fort Hood. A new educational wing was built in 1973, and the sanctuary was remodeled in 1982.
Andrew Butler Photos
Powered by ZENFOLIO User Agreement
Cancel
Continue