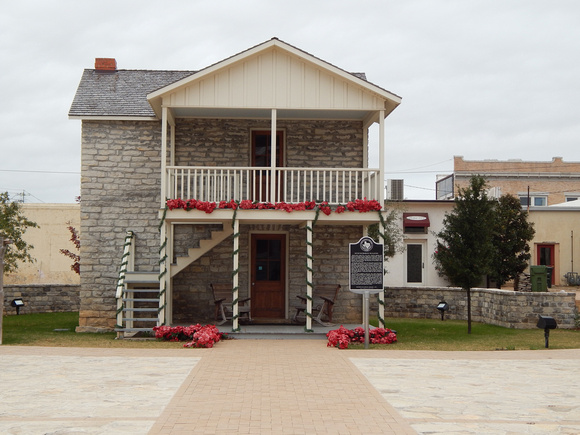 Text: Elijah Estep (1828-1901), San Saba County’s second tax assessor-collector, was born in Sangamon County, Illinois. He married Abigail Montgomery (1826-1868), and the couple was living in the community of Cherokee when San Saba County was founded. When Abigail died, Elijah was left to care for 11 children, ages one to 19. Elijah married Jane (Burden) Williams in 1869, the daughter of Nathaniel (1798-1870) and Sarah Burden. In the early 1870s, Estep built this two-story building facing the courthouse out of locally quarried, rough-cut hard limestone. Each floor is a single 20 x 16 foot room with hewn beam ceiling joists and pine floor planking. A newer 10-foot square room attaches to the west end. Much later, the structure was mistakenly called “the Burden Hotel,” attributed to Nathaniel Burden from 1857, but records reveal that his property was on the north side of the square and that he died in 1870, the year before his son-in-law bought this lot for $75. The building became a residence and Estep operated a mercantile store on the east end of the same lot. The Estep family owned it until Sep. 1890, when prominent central Texas attorney Leigh Burleson bought the property for his law office. Later, E. E. Risien and his heirs owned the property for more than 50 years. The building was occasionally an annex to other businesses, but often remained vacant. It even faced deconstruction in the 1990s before local students helped persuade the William Fritz family (Fredericksburg) to donate the property to the community. The building was restored to its earliest known appearance from a 1911 photograph, including a gabled wooden front porch and exterior stairs. This symbol of San Saba’s frontier period also reminds us of the value of history fashioned from wood and stone.
Andrew Butler Photos
Powered by ZENFOLIO User Agreement
Cancel
Continue