A Tale of Two Medal of Honor Winners 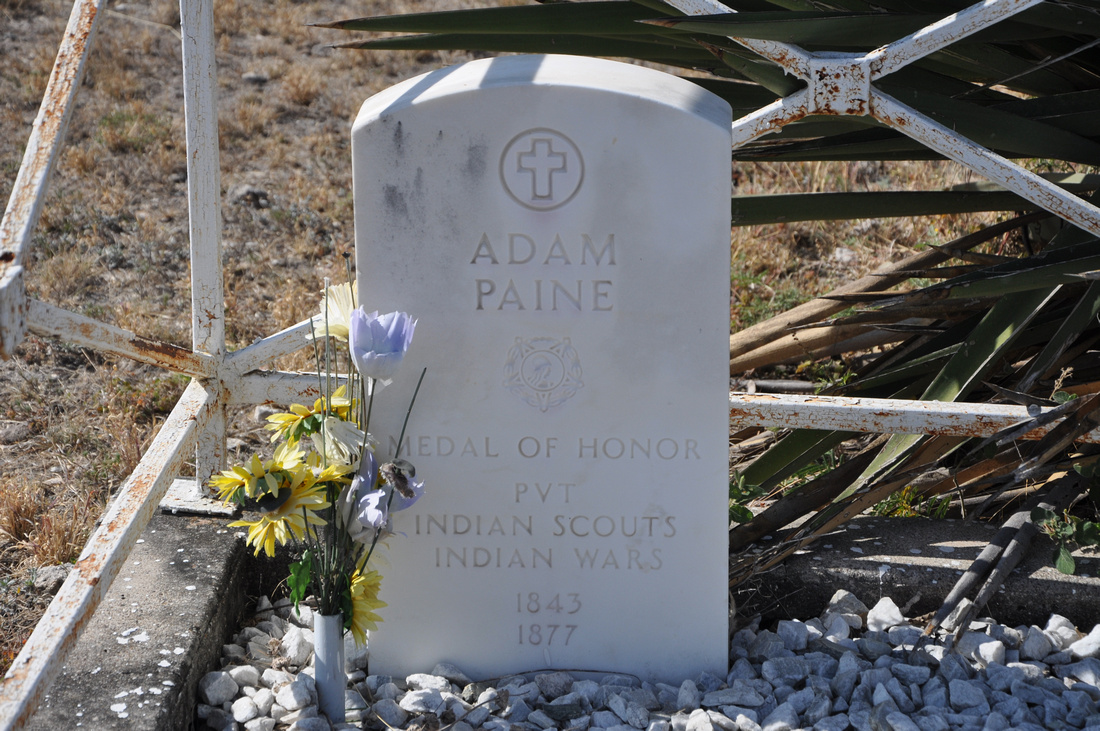 These soldiers were the famous Seminole Scouts recruited in the 1800s at Ft. Clark to patrol the West for Indians. They are either Seminoles removed from Florida or their descendants. Note that Paine was awarded the Medal of Honor.

A Tale of Two National Medal of Honor Recipients

The National Medal of Honor, the highest military honor awarded in the United States, was first awarded on March 25, 1863, during the Civil War.  In the words of the National Medal of Honor Museum, it “is awarded to a member of the armed forces who is prominently distinguished by gallantry and intrepidity, risking loss of life above and beyond the call of duty.” At least 14 Medals of Honor were awarded to Native Americans in the 1870s during the Indian Wars. Adam Paine, a member of the Seminole-Negro Indian Scouts, was awarded the Medal of Honor in September of 1874 for commendable actions during the Red River Wars.

These Scouts were the descendants of slaves and free blacks who fled to the swamps of Florida from the Deep South before the Civll War. Many of these Seminole Negros, including Adam Paine, journeyed with the Seminoles during the 1840s when the U. S. government prevailed upon them to move to Indian Territory in Oklahoma.

Finding life untenable in Oklahoma, some of the Black Seminoles, again including Adam Paine, moved to Mexico in the 1850s, where slavery was illegal. Here, though life  was still difficult, they found that the Mexican government paid them for their scouting and fighting abilities against the Comanches, the Kiowa, the Lipan Apaches, and other tribes who launched raids from Texas into Mexico. Best of all, the Mexican government allowed them to buy land so they could farm.

After the Civil War, hearing of the excellent results in tracking and fighting raiding Indians the Black Seminoles had produced in Mexico, the U. S. Army sent officers to Mexico to recruit them. The Seminole-Negro Indian Scouts quickly proved themselves a formidable foe to raiding Indians in Texas. In return the U.S.Army promised them pay, support for their families, pensions and the ability to buy land. Adam Paine enlisted in the Scouts in 1873.

Unfortunately, the government reneged on most of these promises. For example, they were not allowed to own land in Indian Territory because they were black. Family members could not find work.  Dependents had a difficult time finding food and sometimes “stole” stray cattle which roamed around. White settlers considered this a sort of poaching as they liked to scoop up the stray cattle for themselves. It was a very Jean Valjean situation. Sometimes the Black Seminoles stole food or took a stray cow in order to feed people. In the way crime has always flourished, sometimes some people stole other things.

Sources vary widely over where the events took place which resulted in Adam Paine’s Medal of Honor. According to the wording of the citation provided by the U. S. Army, Adam Paine won his Medal of Honor because he “rendered invaluable service to Col. R. S. Mackenzie, 4th U. S. Cavalry during this engagement” at the Canyon Blanco tributary of the Red River, Texas, September 26-27, 1874. The citation does not describe the specifics of his invaluable service, and details vary from source to source.  Most accounts generally agree that Col. Mackenzie sent out a group of 4 or 5 men, two of whom were Tonkawas, 2 of whom, including Paine, were Seminole-Negro Indian Scouts. If there was a 5th man, he might have been one of the U. S. Cavalry troopers, or more likely, another scout. At any rate, this group was overtaken by hostile Indians. Paine, being the first to reach his horse and mount up, stationed himself on his horse, so as to provide coverage for his group to mount and retreat. In some accounts, when his horse was killed, Paine placed its saddle over his head and shoulders to repel enemy fire. Other accounts say that Paine used the dead horse to repel enemy fire.  Whatever he actually did took the enemy aback, giving Paine time to kill one of the Indians and mount his horse. This allowed Paine to make his escape to his own party and together they fought the hostiles for the remainder of the first day and into a second.

Adam Paine did not re-up in February of 1875. Instead he worked as a teamster between the various Texas forts. On Christmas Eve of 1875 he stabbed a soldier in the heart following an angry argument. A man on the run from that point on, Paine bounced back and forth between Black Seminoles living in Mexico and Black Seminoles living near Texas forts, spending most of his time with outlaws and thugs such as Henry Enoch, a well-known cattle thief. An informant told town authorities at Brackettville, near Fort Clark, that Paine and Enoch would be at the Black Seminole camp adjacent to town on New Year’s Eve. The sheriff and his deputy confronted Paine, who was shot in the back and killed.

The man who shot Adam Paine, Claron Augustus Windus, who went by “Gus,” was also a Medal of Honor recipient. Born in Wisconsin circa 1850, his birth year is given as 1848, 1850 and 1851 by different sources. The Texas State Historical Association gives his birth year as 1850?. All sources agree, however, that Gus Windus wanted to fight in the Civil War. Using TSHA's birth year as the basis for his age, in 1864 although he was only 14, Gus managed to become a drummer for the Wisconsin Infantry by lying about his age. Drummers were usually around 18 years old, but some were as young as 12 or 13.

The Civil War ended in 1865 and Windus played the age game again, and in October of 1866 at age 16, he went to Texas as a bugler in the U. S. Cavalry. The frontier life in reality was not as romantic as it had appeared in stories. Windus stole some horses and deserted at some point in 1866 or 1867. He was eventually caught and court-martialled in 1868.  Twelve months at hard labor was his sentence, after which he remained in Texas.

On July 6, 1870, Indians attacked a train and stole the mail, and fifty-eight men from Fort Richardson were ordered to retrieve the mail. Heavy rains on July 10th and 11th stopped their pursuit of the Indians at the Little Wichita River. The fifty-eight were soon attacked by Kiowa Indians. Windus’ duties during the Battle of the Little Wichita  included helping the surgeon with the wounded and firing on the attacking Indians, particularly snipers. On July 13th Windus and two others returned to Fort Richardson, enduring many hardships along the way, to bring help. Twelve of the fifty-eight men from Fort Richardson, including Gus Windus, received Medals of Honor for their deeds at the Battle of the Little Wichita.