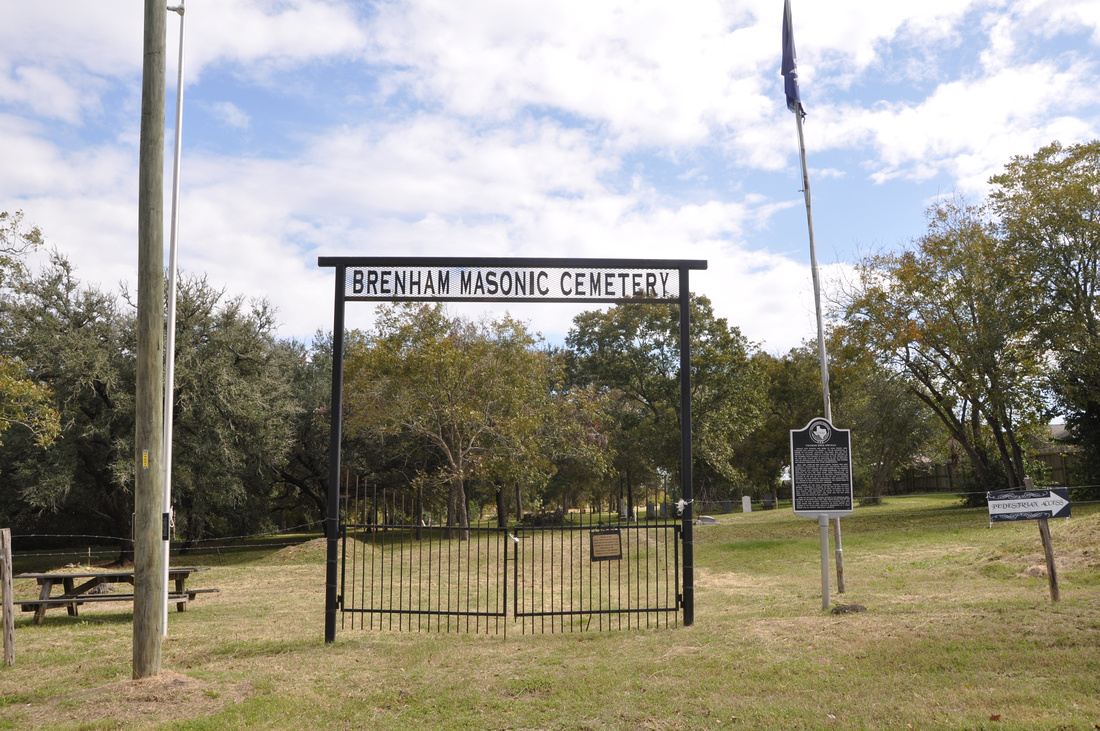 Text: Numerous gravestones dating from the early 1840s indicate this burial ground was in use well before December of 1847, when it was formally deeded to the Graham Masonic Lodge #20 by Chauncey B. Shepard (1812-1892). Brenham's citizens buried many loved ones here in latter part of 1867 as an epidemic swept through the area; the site has been commonly known as "The Yellow Fever Cemetery" ever since. Laid to rest here are: pioneers; veterans of The War of 1812, the The Texas Revolution and the Civil War; state and local lawmakers and officials; educators; and many other who formed Washington County's heritage.

Yellow Fever struck the city of Houston in 1839, attacking a third of its population. Arriving with the warm weather and departing with the cold, the American Plague scourged Houston several times over the next 28 years. During those years Yellow Fever also attacked other busy port cities in Texas such as Indianola, Galveston and Corpus Christi. The Yellow Fever epidemic in 1867 was so deadly that the Masonic Cemetery in Brenham, Texas, acquired the name Yellow Fever Cemetery, based in part because of the two mass graves in the cemetery, each holding the remains of 200 plus Yellow Fever victims.

To victims, symptoms felt at first much like the flu with nausea, muscle aches, headache and of course, fever. These symptoms gave way to others that were particularly horror-inspiring. Victims felt a brief remission for two or three days during which symptoms disappeared; but this reprieve was followed by profuse bleeding from multiple body orifices, jaundice, a hideous black vomit and death.

Doctors were completely stumped by the causes of the disease and equally confused as to how to treat it. They realized that quarantine, a preventive technique, was the most effective method of fighting Yellow Fever. They tried many types of treatments, none of which worked.

Even today there is no cure for Yellow Fever. Medical professionals can address only the symptoms and attempt to relieve a patient’s suffering. We know that prevention of the disease remains the best solution. We do know, however, due to the work of Dr. Walter Reed and the U. S. Army Yellow Fever Commission in the early 1900s, that the disease is spread by the Aedes aegypti mosquito rather than through direct contact between humans or their soiled clothing. The use of insecticides therefore helps to prevent the disease. Then, in 1937, a scientist named Max Theiler created the first vaccine to prevent Yellow Fever. Today outbreaks still occur but are limited to Africa and Central and South America.

Yet today scientists fear that Yellow Fever could stage a comeback. Several factors associated with global warming are conducive to the life stages of this disease. In addition, people all over the world take flights from one country to another, often landing in more than one airport per flight, allowing contagion to spread both by infected mosquitoes and by infected humans. Adding to concern, the use of DDT and other insecticides is now prohibited which has led to increasing mosquito populations. Of greatest concern, the vaccines are only made by four companies and supplies already lag behind demand.

The last known death caused by Yellow Fever in Texas occurred in March of 2002 when a man from Corpus Christi went on a fishing trip to Brazil without getting a vaccination for Yellow Fever.